This Week in Books

Today is the story of Aug. 16th
___________________________________________________________________________
It is the 228th day of the year, leaving 137 days remaining in 2022.
On this date in 1954, the first issue of the magazine Sports Illustrated hit the newsstands.
It was the first weekly magazine dedicated to sports coverage. Its stories were written by some of the best in the business, and its articles illustrated by some of the best sports photography ever shot.
At a time when sports coverage was limited to daily newspapers and radio reports, the magazine started several new conventions: The extensive use of photos, many in color; instituting previews of major sporting events, such as the World Series and college Bowl Games; and hiring and helping to establish some of the top sports photographers and writers in the business.
Some of the writers who graced its pages were Rick Reilly, Sally Jenkins, Robert Creamer, George Plimpton, Frank Deford, Pat Forde, Roy Blount Jr., Peter Gammons, and Joe Posnanski.
Its pages have included the artistry of photographers Walter Iooss Jr., Lynn Johnson, James Drake, and Neil Leifer, who took the famous photo of Muhammad Ali standing over Sonny Liston in 1965 after knocking him out. (He was the only cameraman using color that night.) Leifer also shot the picture from the rafters above the ring, published in Sports Illustrated, when Ali laid out Cleveland Williams in the 1966 heavyweight title bout.
Success did not come immediately, but by the 1960s, Sports Illustrated was the dominant sports magazine, and it continued to set trends. It named a Sportsperson of the Year, generating stories (and coverage for itself); in 1999 it named Ali as Sportsperson of the Century; and it has compiled lists of the greatest athletes and teams in various sports.
The magazine continues to be popular, along with its web site, SI.com. It also created Sports Illustrated Kids, and separate editions in various countries.
No comments: 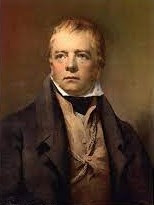 On this date in 1771, the Scottish writer Walter Scott was born in Edinburgh.
He told his stories of the Scots -- their history, their culture, and their whimsy -- in poems and novels. He is sometimes said to have "invented" Scotland, or more correctly, its image in popular culture.
He is also credited with inventing the genre of  historical fiction, which he used to great effect in his novels and long, lyrical poems.
In his youth, Scott was a great reader with an eidetic memory, who loved to amaze others with his ability to recite massive amounts of poetry. When his took to writing, he would compile volumes of the works of others. His first foray into this field was the multi-volume collection, The Minstrelsy of the Scottish Border.
His next work was The Lay of the Last Minstrel, about an old Scottish legend, and his work was enormously popular.
Over the next dozen years, he wrote several long, narrative poems, along with many shorter works. Among these were Lady of the Lake, which contains elements of historical fiction and is still read and referred to today, and the epic Marmion, with these oft-quoted lines:
Yet Clare's sharp questions must I shun,
Must separate Constance from the nun
Oh! what a tangled web we weave
When first we practice to deceive
He then turned to writing novels. His first was Waverley, which tells the story of the 1745 Jacobite Uprising through the eyes of his character, army officer Edward Waverley, Other novels included Ivanhoe, a romance set in England during the Middle Ages; Rob Roy, set in Scotland in the early 18th Century, and Old Mortality, set in Scotland in the late 17th Century.
Scott died in 1832.
No comments:

******
Like her character Millie Gogarty, Hardiman tells a good yarn. 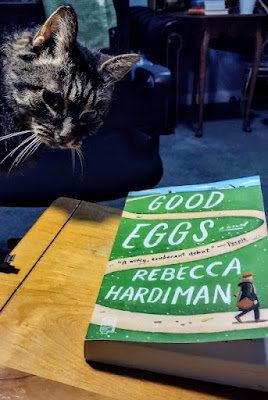 But unlike the elderly Millie, who tends to embellish and stretch out her story telling, Hardiman is concise and keen. She writes a pithy and funny tale about the kerfuffle that three generations of a Irish family find themselves in during the rainy season of their discontent.
Yet, despite their meanderings, mistakes, and muddled lives, we know, deep down, they are good eggs. Why, it says so right on the cover.
The middle guy in this saga is Kevin, a son and a father who is trying to hold their lives together, but like many a hapless dad, finds that no one really listens to him. Still, he tries.
He loves his wife (mostly); he adores his four kids (even when they act out), and he does his best for his mother as she enters the purple phase of her life.
His mother is Millie, elderly and kinda, sorta losing it, but determined to continue as she always has. She wants to keep her seaside house in Dúg Laoghaire, outside of Dublin, but when she gets arrested for mindlessly shoplifting at her local store, gives in to Kevin's insistences she bring in a caretaker.
Then there's Aideen, Kevin's 16-year-old daughter. She is, well, she's a moody teenager hates her family, hates her school, and hates her life -- and she isn't shy about letting everyone know. She does not take kindly to her parents' plan to send her to a nearby boarding school.
There are a few other characters -- Aideen's perfect but bitchy twin, Nuala (who Aideen calls Nemesis); Kevin's mate's mother, Maeve, who gives Kevin the what for: Miss Bleekland, the school's disciplinarian (and old maid); Sylvia, the American helpmate, and assorted friends, neighbors and relatives -- mostly well drawn, but just around for decoration. Except for one of them. Well, maybe two.
So that's the setting, and the story takes off from there. It's a short book of 323 pages -- and 64 chapters! -- so it moves quickly. It may take a while to introduce everyone before the real action starts, but then things hurry along.
It's funny, gentle, and moving.
No comments: 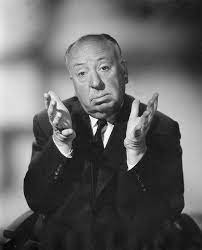 On this date in 1899, the film director Alfred Hitchcock was born in London.
He told his stories visually, on the movie screen, from the days of silent films in England, to the Golden Age of Hollywood in the 1940s, to the peak of his career in the 1950s and into the '60s. He was the master of suspense, relying on tried and true visual techniques he developed -- using the movie camera to heighten tension and filming scenes to give the audience a sense of voyeurism.
He plotted out the visualization of every scene. He know how to hold his audience by making it  viscerally feel the terror the characters are going through -- through the use of mistaken identity, charming villains, and distrustful authority figures.
His films showed a bleak view of humanity and a sometimes macabre sense of humor.
After studying at the University of London, Hitchcock got his start in the movie industry designing title cards -- used in the silent era to introduce a film or explain the action. He quickly moved into directing, variously receiving or sharing credit in his early days.
The Lodger: A Story of  the London Fog, released in 1927, is considered the first "real" Hitchcock film, with the use of many of the conceptions he used that soon came to signify his style. It told the story of a man accused of being Jack the Ripper, and forced to try to prove his innocence. Two years later, he released his first talking film, Blackmail, which became that year's big hit in England.
Five years later, in 1934, he had his first international hit, The Man Who Knew Too Much.
In 1939, he was persuaded to move to Hollywood, where he directed Rebecca, which won the Best Picture Oscar in 1940 and gained Hitchcock his first nomination for best director. (Despite a total of five nominations, he never won.)
A string of successes followed: Lifeboat, set entirely in a lifeboat during the war years; Dial M for Murder; Rear Window, Vertigo, considered by many critics and film historians to be his best work; North by Northwest; Psycho, perhaps his best known work; and The Birds.
From 1955 to 1965, he hosted a popular television series, Alfred Hitchcock Presents.
Hitchcock died in 1980 in Los Angeles.
No comments: 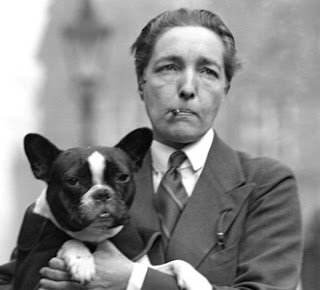 On this date in 1880, the English writer Radclyffe Hall was born.
Hall told her stories in novels and in verse about the struggle for self-identity. She wrote about lesbian relationships before people accepted that such partnerships even exisited, never mind accepted.
Hall self-identified as a "congenital invert," a term used in the 19th Century to describe what today would be called transgender. Hall wore traditional male clothing and was lesbian. But she always has been referred to as she and her,  never expressing a desire for other pronouns, and that is what every biographer has used.
Her early writings were poetry, and she published five volumes between 1906 and 1915. Her first novels were unremarkable, although The Unlit Lamp was the first to deal with a lesbian relationship. Her 1926, Adam's Breed, was about the life of a restauranteur, and it was successful and won several awards.
But her groundbreaking novel, The Well of Loneliness, told the story of the love between a young woman and her older, female companion. While it was not explicit, a judge in England declared its discussion of lesbians "an obscene libel" and ordered all copies destroyed.
Later, a judge in the United States rejected that contention, finding the mere discussion of homosexuality was not obscene.
Still, Hall's later novels mostly avoided the topic.
She died in 1943 in London.
No comments:

Pogue57
I'm a 65-year-old guy born and reared in New York City and now living in urban Northern Kentucky. I buy too many books and have too many on my To Be Read list. When not reading and drinking tea, I'm out running. Or writing about any of these things.

Based on one to 10 stars

More links for you

"I love this review. Really love it. Could have written it myself. Nicking my style."
--Kit de Waal

A man in old age,

but holding out always.

The man in black fled across the desert, and the gunslinger followed.